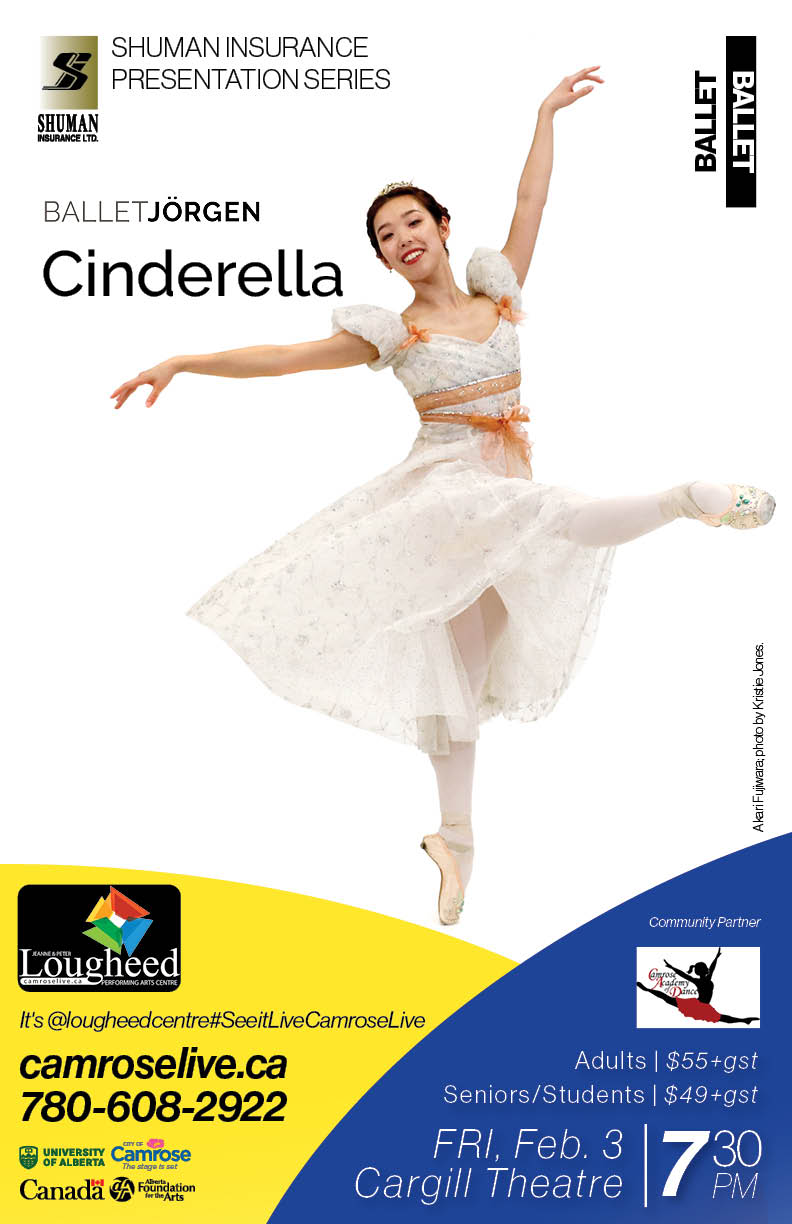 We are excited to see Ballet Jörgen’s Cinderella return to Camrose.

Find out more about the performance!

Synopsis
ACT I
At Cinderella’s House

The Old Woman predicts a bright future for Cinderella. She gives Cinderella a seed to plant explaining that when it is grown, a fairy will emerge and grant her one wish. The Old Woman disappears and all returns to normal. Two Suitors arrive to escort the Stepsisters to the ball. Alone, Cinderella feels dejected but then remembers the seed and plants it in a pot. Strangely comforted, Cinderella falls asleep on the hearth, her world dissolving, leaving large trees in its wake. Fairies emerge out of the trees. The Lead Fairy awakens Cinderella from her sleep and the Fairies bestow upon her everything she needs for the ball. The Fairies warn Cinderella not to kiss or be kissed by anyone, or the magic will be gone. After promising to heed the warning, Cinderella is swept away to the ball.

ACT II
At The Ball

Cinderella’s Stepsisters and their Suitors, along with the other guests, arrive at the ball. The Prince enters, and the female guests fawn over him. Cinderella enters and, enchanted by her beauty, the Prince asks her to dance, causing much gossip and jealously among the guests. Prince Charming and Cinderella dance joyfully together while the jealous Stepsisters demand attention of their own. The Prince and Cinderella finish their dance, gazing into each other’s eyes. The Grand Waltz plays and all the guests are swept up in the moment. The Prince steals a kiss and the spell is broken. Cinderella flees from the ball before her stepsisters can recognize her. As she runs out, she drops one of her slippers.

The Prince and the two Suitors set out to find Cinderella, travelling through the enchanted forest. Neither of the Suitors can resist the Fairies’ magic and fall asleep. Prince Charming survives the Lead Fairy’s test, proving his love for Cinderella . The Fairies point the way and he continues his search. At Cinderella’s house, Cinderella awakens in the kitchen, thinking it all a dream. When she realizes she is wearing the remaining beautiful slipper, she hastily hides the slipper in the flowerpot. Cinderella’s Stepsisters enter just having woken, feeling that they made quite an impression at the Ball. At the sight of Cinderella, they stop their musings and berate Cinderella for her shortcomings and lack of proper respect for her esteemed stepsisters. The Prince arrives at the house and the Stepmother tries to hide Cinderella from view. The Stepsisters do everything they can to convince the Prince that there is no one else living at the house. The Stepsisters attempt to squeeze into the slipper and win the hand of the Prince, but to no avail. Cinderella runs to retrieve her remaining slipper and the Prince realizes he has found his match. In love, Cinderella and her Prince dance together. The curtain closes on them content and at peace in each other’s arms.