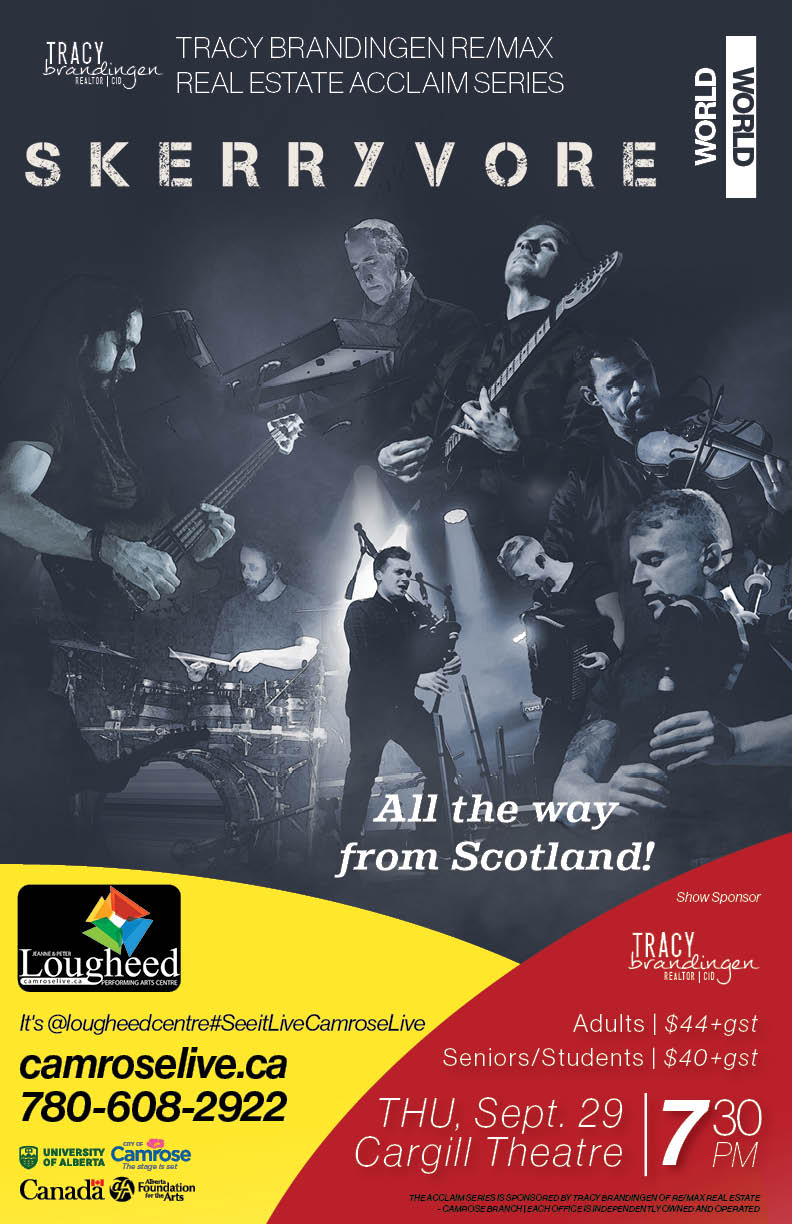 Since 2005, Skerryvore have brought their performances to audiences across the globe, from their early days in Scottish West Coast halls and bars, to Festival crowds in USA, Canada, Australia and throughout the UK and Europe. Picking up Scottish traditional music’s ‘Live Act of the Year’ twice on the way – in 2011 and again in 2016 – the band’s wide range of influences and talent produce a musically expansive, high energy set that excites and captivates audiences.

With a mix of fiddle, accordions, pipes and whistles, alongside guitar and vocals, underpinned by driving bass, drums and keys, Skerryvore represent the best in contemporary Scottish traditional music. Their 6 studio albums demonstrate the wide range of influences the individual musicians bring to the mix – a unique fusion of folk, trad, rock and Americana, with even some jazz in there!

The band celebrated their 10th birthday in 2015 by launching their own 6000 capacity ‘Decade’ festival, following this up with successful ‘Oban Live’ events over each of the next four years. In 2020, their 15th anniversary event, featuring some of the musicians and friends who have shared part of Skerryvore’s journey, was due be held against the stunning backdrop of Inveraray Castle. During the Covid-19 crisis, which closed down the band’s touring and performing calendar for most of 2020 and well into 2021, Skerryvore explored and developed alternative performance possibilities, including live streaming and virtual performances.

The band’s single, ‘Everyday Heroes,’ recorded from home, and aided by a variety of musicians from across the country, reached number one in the official Scottish charts and, so far, has raised several thousands of pounds for NHS staff charities. Also recorded in isolation, their single ‘You and I’ spent seven weeks, in January and February 2021, on BBC Radio 2’s playlist, unheard of for a track from an independent label. ‘Together Again,’ released in July 2021, also made it to Radio 2’s playlist, celebrating the beginnings of a return to meeting up with friends again.

Comfortable in the studio though the band are, it’s on the road in front of a live audience that they really come into their own. Their live album, recorded at Scottish venues in late 2019, and released in summer 2020, highlights this, as well as giving a hint that there’s still much more to come for Skerryvore’s growing worldwide fanbase. Skerryvore were delighted to return to touring in USA in September 2021, followed by European and English Tours in November 2021 and their Scottish Winter Tour in December 2021.